In theory, JC Fridays means free arts events of all types. The organizers of the festival promise music and live performance and film and poetry. That’s no fib: All of that stuff is on the calendar at jcfridays.com, which you should check out immediately.

But in practice, JC Fridays is a visual arts celebration and a quarterly echo of the annual Artist Studio Tour that has defined the cultural life in this town for decades. There are more art openings and gallery events listed on the JC Fridays site than all other options put together. This means it’s a fine excuse to run all over Jersey City, taking in as much visual art as you can stand.

For instance, if you’ve never been to the Fine Arts Gallery on the Saint Peter’s University campus, this coming JC Fridays is giving you a good reason to do just that. “Forged in Fabric” collects the works of three Jersey artists each of whom are engaged in the sort of innovation that has made modern fiber art a plush alternative to traditional painting and sculpture. Mollie Thonneson makes translucent, pennant-like pieces from repurposed lingerie; the result is very pretty and outrageously feminine. Christine Barney’s sculptures dance on the intersection between sleek fabric and cool glass.

Then there’s Anne Trauben, whose consistently mysterious work feels like a map of emotional states traced in loops and sags of string. Her pieces in “Forged in Fabric” are assembled from scarves and ribbons, whorls of yarn and electrical cord, suspended lightbulbs and at least one pom-pom that appears to have been deconstructed from the inside. These are discrete works, but they’re all shown together, touching, overlapping and blending into each other. It’s one complete thought in several segments, and it hangs on the wall like a net for the unwary. (5–7 p.m. on the fifth floor of the Mac Mahon Student Center, 47 Glenwood Ave., saintpeters.edu/fineartsgallery.)

A few blocks east on Summit Avenue, SMUSH Gallery follows up the sensuous “Heart Echoes” show with another single-artist abstract exhibition. Marta Blair, the artist behind “Heart Echoes,” is an Inwood resident without many deep ties to Jersey City; Myssi Robinson, by contrast, danced with the Nimbus company for three years and has performed at other spaces around town, including Jersey City Theatre Center and SMUSH. She’s a visual artist as well as a performer, and “ìīíïîinches,” her solo show, opens tonight. It’s a good match: Katelyn Halpern, the curator at SMUSH, is a dancer, too, and she’s already shown that she recognizes kinetic visual art when she sees it. I expect a show of considerable emotional velocity.  (6–10 p.m. at SMUSH Gallery, 340 Summit Ave., smushgallery.com)

Hamlet Manzueta was another artist who was deeply embedded in the local scene – until he wasn’t. The Dominican-born Manzueta, who died in the winter of 2019, was a big personality: a drag queen, a designer, and a lover of life. He’s remembered for his public access television show “The Pot,” which was silly business in the best possible way, and for his drag characters, too, and he’s survived by his visual art, which manages to radiate innocence and trepidation in equal measure.

Manzueta’s work is liminal in the sense that it does speak to the experience of queerness and otherness in a contemporary society that still isn’t comfortable with either, but mostly it’s an expression of a singular personality that doesn’t fall squarely into any particular identity category. “One Year After,” a show curated by Andrea McKenna at the Art House Gallery, is a more than just a show of Manzueta’s paintings. It’s a memorial to a man whose spirit is missed in a town in which playfulness is often in short supply. Technically, this show doesn’t launch until Saturday, but Art House is doing a sneak preview of the exhibition for JC Fridays. The Gallery is only open for an hour, so act fast. (6–7 p.m. at AHP Gallery at the Cast Iron Lofts, 262 17th St., arthouseproductions.com.)

McKenna’s own work is on display elsewhere. At Eonta Space, her somber, drape-like paintings of female forms engulfed in color fields of rust red and institution green are juxtaposed with Cheryl Gross’s vibrant drawings of endangered animals. “Commit to Memory: The Precipice of Extinction” has been up since the beginning of February, and it remains one of the most provocative visual art experiences around town — and an echo of the thunderous, inspiring Federico Uribe “Animalia” show that landed with fanfare at the Montclair Art Museum last month. (6–10 p.m. at EONTA Space, 34 Dekalb Ave., eontaspacenj.com).

“Commit to Memory” is the cry of the natural world sliding toward desolation; “Exquisite Logic” teases out the humanity lurking in the belly of the machine. Pat Lay’s clever work begins with an image of a computer processor or electronic component. From there, she mirrors it, colors it and manipulates it until it achieves spiritual overtones reminiscent of Asian devotional art. Lay calls some of the images in her show “digital mandalas,” and that’s not a misleading description. They’re meditations on symbols and patterns with long histories — symbols and patterns that follow humanity around no matter how deep into the technological murk we go.

The Pat Lay show marks the maiden voyage of the Dvora Pop-Up Gallery at the Oakman Condominiums in the Powerhouse Arts District. When the District ordinance passed many years ago, it was spaces like Dvora that advocates were envisioning — accessible street-level galleries with works visible to passersby. For the moment, the pop-up is getting booked by people who were around Jersey City during the Arts District fight: Jim Pustorino and Anne Trauben of the Drawing Rooms space in Marion. (Yes, that’s the same Anne Trauben I wrote about earlier; Jersey City rewards tirelessness.) They know their history and have a sense of what’s at stake. The interior of Dvora is a bit raw, and industrial, too, but that suits Pat Lay’s computer dreams extremely well. From the sidewalk through the plate glass windows of the Dvora space, the works look like Persian rugs designed by artificial intelligence. That’s a compliment. (6–8 p.m., at Dvora, 160 First St., drawingrooms.org/dvora-gallery).

Lay’s work stood out at the juried segment of the Art Fair 14C, too. Robinson Holloway, the director of the Art Fair, also runs the Village West Gallery in the shadow of White Eagle Hall, and for JC Fridays she’s turned the space over to a four-person roster of arts organizers with a subtly provocative aesthetic that would have fit in perfectly at 14C. I’m most interested in “Art of the Curators” because of the presence of Anonda Bell, a Newark-based artist whose immersive cut-paper panoramas, often affixed directly to the wall, genuinely merit a comparison to Kara Walker. The slyly-titled “The Suburbs at 4 a.m.,” which she presented at Ramapo College a few years ago, reimagines the sleepy Jersey hinterlands as a forest of domestic junk thick enough to provide a hiding place for an imaginative woman. I’d expect something similar from Bell at Village West tonight. (7–9 p.m., at Village West, 331 Newark Ave, villagewestgallery.com). 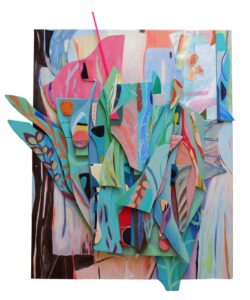 Finally, curator Kristen DeAngelis, another 14C organizer and former proprietor of the now-shuttered 107 Bowers Gallery in the Heights, is once again making good use of the atrium at the Majestic Condominiums. Katia Bulbenko is one of those artists who splits the difference between painting and sculpture: Her pieces are multi-level agglomerations of colorful wood strips and silk scraps. They’re calling the show “Fragments/Reassemblage,” and once re-assembled, these fragments are presented like bouquets.  I’m romantic enough to find that sort of thing irresistible, and if you’ve read this far, I reckon you are, too.  I’ll see you around town tonight. (6– 8 p.m., Majestic Theater Condominiums, 222 Montgomery St.)